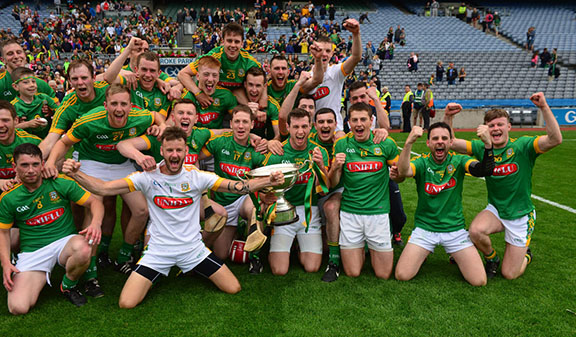 Meath won the GAA Hurling Christy Ring Cup (Division 2 All Ireland) in 2016, by a point over Antrim after a replay. They had earlier beaten Wicklow, London and Kildare. In all, eight counties were eligible for the Christy Ring Cup, Meath. Kildare and Wicklow (Leinster), Antrim, Derry, Down (Ulster), Roscommon (Connacht) and London (Britain). Meath fell 1-7 to 0-1 behind after only 19 minutes, but a dramatic late comeback, spearheaded by substitute Sean Quigley, who only came on in the 64th minute, saw Meath claim a first ever Christy Ring Cup by a point (2-18 to 1-20), or so it seemed, as the score was later shown to be erroneuous, and aReplay needed, this time Meath winning by a point (4-21 to 5-17). Stephen Clynch hit the last-minute point from a free in extra-time in the replay, in what turned out to be a nine-goal thriller.

The Christy Ring Cup is the Tier 2 All-Ireland County Championship in Hurling, named after the great Cork player.

From its inception to 2018 it was a Double-Elimination Cup (dubbed the “Back Door” by the Press) and in 2019 was changed to two groups of 4, playing a Single Round-Robin with Semi-Finals & Final.

Thanks to Gabriel McCloyne & Tom Dunne.